Many people believe that to be spiritually enlightened you have to go with the flow and the mannerisms of this world. To a certain extent it is true in that God, the Father of Creation (Jehovah, Yahweh, Devum) does say that we should not hide ourselves away from the world. At the same time, Jesus Christ (Yeshua, Yeshu Christu, Yeshuay) did say when He was in the Temple, “Give what is Caesar’s to Caesar; and give to God, what is God’s.” So, yes, we are to live in this world, we are also to to accept the authority of God, as the Creator of Humanity and of all this things. Those that God, the Father of Creation (Devum Jehovah, Yahweh) has enlightened or chosen to reveal His Divine Wisdom to are to live in this world, in order to witness to humanity what ways are a part of His Divine Laws of Love and what Satan teaches in order to deceive humanity away from them. The Divine Laws of Love, which are ways of unconditional love, mercy, and forgiveness, will be mimicked by evil in order to deceive humanity; where Satan and his demons will be successful in convincing the majority; however those that have been enlightened by Divinity will know of the deception, and because they will be the minority in knowing this, will be seen as those that are going against the grain of “conditional love, vengence for following evil’s ways, and as a result, unforgiveness”.

By “going against the grain”, those that have been enlightened by Divinity’s Truth will undergo earthly trials and hardships, just as all the Prophets that were Divinely Enlightened, had also done. Why? Because if God, the Father of Creation states that His Ways are not of this World, then whose ways are of this world? Satan’s ways. So when people say, “where is God when there is all of these wars, genocide, worldwide hunger…or what kind of God would allow for this to happen?” As God’s Creations, who are we to challenge God? He gave us the freewill to live our lives the way WE CHOSE. He does not enforce His Ways onto us. On the other hand, who does try to enforce his ways onto us? Yes, evil does try, for one agenda, to drag away as many souls away from being enlightened by Divinity, and the Divine Laws of Love. However, even in this, it is the choice of avoiding or ignoring God’s ways that we fall to enticement of Satan and his ways. So, the horrors that exist in humanity today, is because of the daily choice of humanity that it is into existence. This all began with Adam and Eve, in the Garden of Eden. Those that are spiritually enlightened by Divinity, will constantly be in trials and hardships, to fight the sinful human nature, and the predominance of evil in the earthly realm around them. Evil wants to inhibit Divinity from transforming the sinner and his/her soul. Lucifer (who became Satan) was himself called the “angel of light”, so will he not know how to twist Divinity’s Truth? This is why it is said that human beings are born as sinners. Evil does not want the enlightenment to be fruitful and to be revealed to the majority. He wants us to act on impulse and emotion, because he knows of the sinful human nature that human beings are born as, and those of us in humanity that conform with following our feelings….then yes, we will conform to the ways of this world. Those that decide to battle against the sinful human nature because of what was revealed to them through the Divine Spiritual Enlightenment given by God, the Father of Creation, will be the minority, will constantly be battling hardships and trials, to the point of being considered the “last on this earth” by the majority.

Those that become spiritually enlightened by Divinity, will be guided by Divinity’s Holy Spirit. However, there is always going to be that constant spiritually battle between trusting in the Holy Spirit, and going along with what is “natural” in following the sinful human nature. Jesus Christ, as God’s Son, came to this Earth, underwent the same spiritual battle, in order to understand what humanity has to undergo while they roamed this earth, but also to show humanity what is required of us in order to enter into the Eternal New Heaven. He came to be the Visual Example. At the same time, God, expects us that when we fall to the ways of our sinful human nature, that we immediately see the error of its ways, because He gave those that He chose, the spiritual wisdom to correct them. Jesus Christ came on to this earth, contradicting what evil calls as “royal circumstances”…as “divine conditions”, to show humanity how evil will try to deceive them away from God’s Divine Laws of Love. This is why it is so hard for people to understand that Jesus Christ was the Son of God, and the Christians are foolish for believing this. However, evil knows that those that are Divinely Enlightened are not foolish, and will try to suppress them at all costs in the parameters that it has control over, and that is in the earthly measures, in the sinful human nature. Hence what Jesus Christ said above, in that the “last shall be first, and the first will be last…”

Through His Death on the Cross at Calvary, Jesus Christ gave Humanity one last chance in correcting their sinful human nature. He not only taught through His Preachings, but also provided a Life Example to follow, where upholding God’s Divine Laws of Love may require God’s Called Souls to uphold them to the point of earthly death. There has to be a spiritual death to the sinful human nature, in order to rid evil’s influence on God’s most prized creations, humanity. Evil will try to scare through his earthly measures, in order to prevent this, which meant physical death to the earthly body. In the Book of Revelations in the Holy Bible, God, the Father of Creation does state that those that know of Divnity’s Truth should be ready to uphold this truth at all costs, even to the point of death to the human body. Through the saints, God, the Father also states: 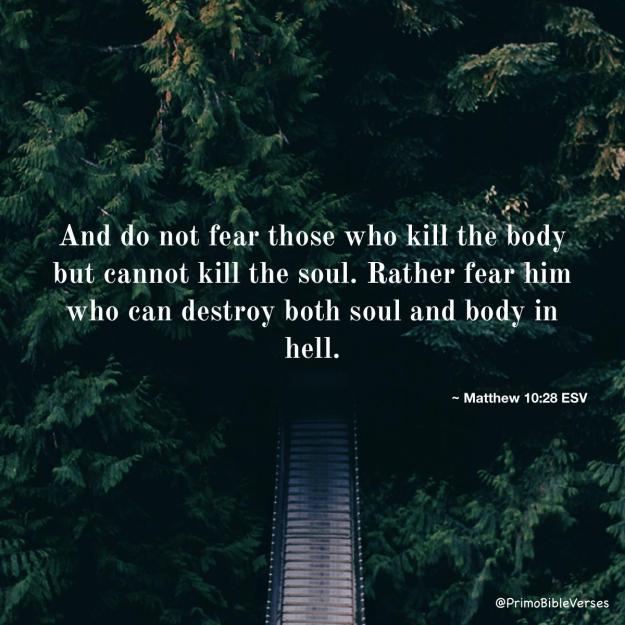 My brothers and sisters who seek the Divine Laws of Love, continue to spiritually feed your souls through the Word of God, the Father of Creation. Continue to pray for the strength to continue enduring the trials and hardships, for they will grow in a believer’s life. Continue to gain the understanding of what Jesus Christ did at the Cross, at Calvary, and about His Teachings, when He roamed this earth. God’s Truth is undeniable, evil to those that rebelled against Him. The truth of the purest of souls are admired by all, mimicked by many. God sees every hardship, every tear shed, every injustice. He has given authority to His Son, Jesus Christ, to come and eliminate Satan and his minions, for the deception and destruction they have brought unto His Most Valuable Creations….and they know that their time is running out, which is why our trials will become more harsher by the minute. Endure….endure at all costs…showing evil that you are committed to the promises through which God has given….and the confidence in knowing that Jesus Christ will make evil answer to what it has done to them. There will be few in the end, so do not be afraid for not going with the majority. Just continue to feed your soul, so that it can continue to be fertile soil for the Holy Spirit to dwell, and guide.

Remember Satan and his ways and their trials and hardships to God’s Creations are temporary, while God’s Divine Ways are permanent. Therefore, His Wrath on behalf of His Creations will be permanent. Have confidence that God, the Father of Creation sees the few that decide to follow the Divine Laws of Love, and help such souls to discern the deception of evil.